In the surroundings of Lignano... Trieste
Späť 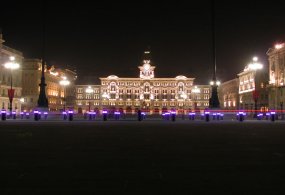 Trieste is chief town of the omonymous province and of the autonomous region of Friuli-Venezia Giulia. The city is located in the far north-eastern Italy, near the border with Slovenia, in the northernmost part of the Adriatic Sea and it overlook the Gulf that takes his name. Despite the proximity to the sea, the territory presents a hilly to mountainous morphology. Mount Carso, for example, reach the altitude of 458 metres above the sea level, located about ten kilometres from the city centre. Surrounded by the plateau Carsico, the city is divided in different climatic zones depending on the proximity to the sea or on altitude.

Under the streets, crossed every day by hundreds of people, flow small rivers coming from the plateau. In the past free to flow, since the city grew in the second half of 1700, they were channelled into special pipes and still today they flow under Via Carducci, Via Battisti or Via delle Settefontane.

Trieste is a borderland
, a meeting point of different cultures, religions, languages, arts and ethnic groups that in the different periods influenced the development of the city, left a deep mark and combined together with the life of its inhabitants. In fact, you can see a medieval castle on the hill of San Giusto, churches of different religions to which Trieste has always given hospitality, palaces in neoclassical, Art Nouveau and Baroque style, Roman ruins and buildings of the eighteenth century.

You will be enchanted by the antiquarians in the "città vecia" (old city), walk along the orderly streets of Borgo Teresiano, taste a very good coffee at Tommaseo, a presnitz in the cake shop where Joyce was one of the family, refresh yourself with the boiled meats in Austrian tradition or with the sardines "in savor" in the old taverns. In Trieste you can find everything and discover how many different thoughts and styles can peacefully coexist, creating a unique and fascinating place.

Fascinating as the Piazza Unità d'Italia, the main square in Trieste, from which you can enjoy a wonderful panorama on the Gulf.

It is located at the foot of the hill San Giusto, between the Borgo Teresiano and Borgo Giuseppino. The square is on one side on the Gulf of Trieste and it is surrounded by many palaces. Rectangular, for surface it is the biggest square in Europe overlooking the sea. At the bottom of the square stands the Town Hall, while on north-east there is Palazzo Mondello dating 1870, Casa Stratti with the famous Caffè degli Specchi opened in 1839 and the Government Palace. In front of these buildings, you find Palazzo Pitteri and the oldest shipping company in Italy and one of the oldest in the world: the palace of the Lloyd Triestino.

The square and its palaces have been renovated between 2001 and 2005, making these place the lounge of Trieste and the reference point for all tourists wishing to visit the city.

From Piazza Unità d'Italia, that took this name after the annexation to Italy in 1955, you can visit Cavana, the characteristic old city with its winding streets, or reach the near Piazza della Borsa with the imposing Palazzo della Borsa. Also known as the second lounge of the city, the square was the economic centre of the city throughout the nineteenth century. Piazza della Borsa continues until the beginning of Corso Italia, an important city street.

After Piazza Goldoni, you arrive in Via Carducci, where it is recognizable the structure in Hapsburg-style.

In fact we arrived in Borgo Teresiano, built around the middle of eighteenth century and wanted by the then Empress Maria Theresa of Austria. The area was designed to give a little breathing space and develop to the city, that was witnessing the flourishing trade port. It was obtained by the burying of the salt pans of the city, urbanizing an area outside the city walls.

Right here there is Canal Grande, built at the same time with the Borgo Teresiano, so boats could reach the city centre to load and unload their goods.

In its initial shape, the channel was longer as it is today, and it came up to the church of Sant'Antonio. The end was in fact buried in 1934, with the rubble coming from the demolition of the old city, obtaining so the current Piazza Sant'Antonio, still today the Canal Grande is crossed by the Red Bridge, where there is a statue of James Joyce, in memory of its permanent in Trieste. At the beginning of the channel, there is the Green Bridge.

You must not forget the banks: a nice walk along the coast of the city allows to see particular glimpses and to stop in the characteristic coffee bar suspended on the water with a breathtaking panorama. Walking along, you can also discover the entire coast of Trieste, arriving at the Miramare Castle, love nest of Maximilian and Charlotte of Austria.

But don't linger over these information. Live Trieste and discover its essence, made of suggestive mixing of different cultures, arts and people.