Between 56 BC and 50 BC, thanks to the initiative of Julius Caesar, Romans created a town, Forum Iulii, from which took the name the entire region Friuli. The Roman walls are at the basis of the Venetian walls still exist.

In the fifth century AD, after the destruction of Iulium Carnicum by the Avars and of Aquileia by the Huns, Cividale grew as populations and strategic importance, becoming bishopric seat. With the arrival of Lombard in 568, Cividale was the chief town of the first the Lombard Duchy of Italy (Duchy of Friuli). In that time it changed the name in Civitas, the city par excellence, who became then Cividale.

Destroyed by Avars (610), it remained an important centre and revived with the name of Civitas Forumiuliana, to become the military and political centre of Venetian. The seat of Patriarchate of Aquileia remained even after the expulsion of Lombard up to 1238.

From the twelfth century it was a free town and centre of an important market; since that moment it was the greatest political and commercial centre of all Friuli, so much to obtain from the Emperor Charles IV the opening of the University in 1353. In 1419, during the war with Venice, to drive out the Hungarian, the city surrendered to Venice.

In 1797 with the Campoformido Treaty between Napoleon and Austria, Cividale went to the Hapsburg and only in 1866, after the Third Independence War, the city was annexed to Italy Kingdom with Veneto and Friuli. During the First World War it was seat, for a short time, of the command of the II corps and it was damaged by air raids. After the defeat of Caporetto, Cividale was occupied by Austrian.

Of all these historical events, especially of the Lombard domination, Cividale shows proudly the signs. In fact, starting from the Cathedral Square, you meet immediately the Basilica of Santa Maria Assunta built from the fifteenth to the eighteenth-century in Venetia Gothic style. Inside there is the beautiful Silver Altar Piece of Pellegrino II, one of the masterpiece of Italian medieval goldsmith's art.

From the Cathedral you enter in the Christian Museum which houses, among others, the Baptistery of Callisto and the altar of Ratchis, Lombard masterpieces. The Baptistery is named after the Patriarch Callisto and it is an octagonal baptismal font with columns that support finely decorated with inscriptions and floral motifs arches. The Altar of Ratchis, dedicated to the eponymous king of the Lombard, is a rectangular stone richly decorated.

In Piazza Duomo there is also the Palazzo dei Provveditori, built on a project of Palladio, which houses now the National Archaeological Museum of Cividale del Friuli and hase, especially, archaeological finds of Lombard period and important medieval manuscripts.

Behind the square you will find the Lombard city: with a short walk you will be in front of the Lombard Temple, the highest expression of early Middle Ages. In front of the temple of eight century, the beautiful panorama on the river Natisone. The monument has a great prestige because of the exceptional works of arts, so that for many the same name of the city ideally identifies with the name of the Lombard Temple. The mystery surrounding this small temple is dense: it is unknown whether the original destination, the primitive structure and the workers who worked there. Of particular beauty are the stuccoes in the main part of the temple and the frescoes.

One of the mystery of Cividale is the Celtic Hypogeum. A short distance from the Lombard Temple it is located this place rich in charm and mystery dug into the ground, of which is however unknown the function. The hypogeum consists of different underground rooms, carved into the rock with primitive techniques. A steep stair leads in the central room, from which radiate three corridors. In the walls there are niches and rough benchesm but the great mystery is represented by three coarse masks. The original function of this very special monument is still an unresolved question. Apart from the fanciful interpretations mix of legend, it was hypothesized a funerary use of the hypogeum in Celtic time, while others believe the rooms, jails of the Roman or Lombard period.

Certainly the most intriguing legend is that concerning the construction of the huge Devil's Bridge, that crosses the river Natisone and from which you enjoy a wonderful view. The legend wants that the bridge was been built by the devil (hence the name) in exchange of the first passer-by. According to tradition, the inhabitants of Cividale were not able to build a bridge at that place, so they called the devil, who promised to solve the problem in exchange for the soul of the first who had crossed the bridge. Inhabitants accepted this condition and the devil built quickly the bridge with the assistance of his mother, who brought in her apron the great stone at the centre of the river, between the arches. Inhabitants of Cividale were not fools: doing a dog cross the bridge, they deceived the devil, who had to be satisfied with the soul of the animal. 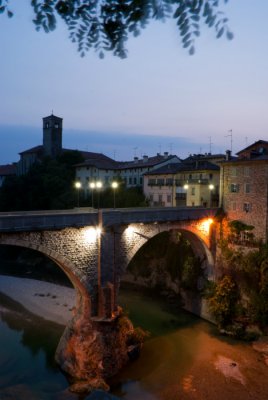