In the surroundings of Lignano... Venzone
Назад 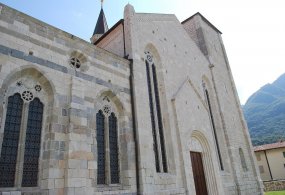 Venzone is a town in Friuli Venezia Giulia, who owes its fortune to the favourable geographic location: an obligatory point of passage from the time of Celtic (500 BC).

These are then followed by the Romans, who made of Venzone their city along the route of the Via Julia Augusta, that from Aquileia led to Norico. In this settlement was probably joined the castrum. Later there were several invasions of barbarians, until the Lombard and Carolingian.

During the Carolingian Empire (776-952) there was the first settlement of Venzone and in 1077 it became part of the Patriarchate of Aquileia, exerting an important role for the control of trade.

In 1420 under the Doge Tommaso di Mocenigo became part of the Republic of Venice, reaching in that period its peak. In 1797 Venzone was occupied by the troupes of Napoleon and after the Campoformido treaty it was dominated by the Austrian for a brief time. In 1866 became part of Kingdom of Italy.

In 1965 it was declared a national monument of great historical and artistic interest.

The history of Venzone is closely linked to the violent earthquake which shook the Friuli in 1976 and which completely razed to the ground many villages and towns, including Venzone. Thanks to the foreign aid and the tenacity of the inhabitants, the city reborn with and unprecedented technical and cultural operation, reassembling its architectural identity through the reconstruction stone by stone of all its buildings. This action, without precedent, has made that Venzone can be again rated among the most important and interesting historical towns of Italy.

From this point of view has been very important the reconstruction piece by piece of the fourteenth century Cathedral of Sant'Andrea. Collapsed during the earthquake, it has been completely rebuilt with its pieces and open to the public in 1995. in the Cathedral you can damire the frescoes, the only remains almost intact after the quake in 1976.

Near the Cathedral there is the cemetery chapel of San Michele, of the first half 1200 and rebuilt after the destruction of 1976, in whose crypt are preserved the famous mummies of Venzone.

The "mummies" are the bodies of people who were buried in tombs in the Cathedral between the fourteenth and the nineteenth, so it was important people for the city (such as notaries, nobles, lawyers, priests, rich merchants). The mummification process was not due to the human intervention, but to natural causes (temperature and humidity, high presence of calcium solfate in the soil). The popularity of this mummies was already in the past centuries, so much that the even Napoleon would visit it in 1807.

Beside the city, we suggest to visit the entire territory of Venzone, where nature offers the opportunity to make exceptional excursions: from the simple and relaxing walk in the greenery along easy paths, to the excursions in mountains and in the Park of Prealpi Giulie, from the nice experience of the horseback riding along the banks of the river Tagliamento to discover the springs of Pradulin in Portys and of Ledra in Venzone, to the opportunities for mountain-biking along the many forest trails.