In the surroundings of Lignano... Villa Manin
Назад 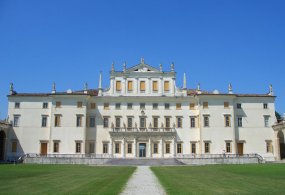 Venetian Villa located in Passariano of Codroipo (Udine province).
Family residence of the last Doge of the Venetian Republic, now houses several exhibition of painting of great value and in its large park take place concerts of great artists during the summer season.

Villa Manin is an architectural complex built by the Manin family in the sixteenth century to celebrate the power and the richness of the House. The work of Ludovico Manin in the seventeenth century makes the villa an integral part of the surrounding territory.

The life of the majestic complex of Passariano has always been linked to historical and political events of this area: in this way the Villa became headquarter of French troops commanded by Napoleon Bonaparte in 1797. Napoleon himself lives there plays the negotiations leading to the Campoformido Treaty. With this Treaty, which marks the end of the Venetian Republic in favor of the Hapsburg Empire, begins the decay of the power of the Manin, leading the Villa to degradation in the nineteenth century.

After half of the twentieth century the Villa was purchased by the Ente per le Ville Venete and in 1969 by the Autonomous Region Friuli Venezia Giulia, the current owner.

The atrium of the Villa is a warm welcome for all visitors, who immersed themselves in the most richly frescoed room: it was Louis Dorigny to paint the Triumph of Spring in the round central.

At Villa Manin there are also stable museums as the Carriage Museum and the Armory, and a beautiful chapel dedicated to St. Andrew the Apostle.

Villa Manin is set in an eighteen-hectare park which is part of the complex. During the walk it possible to admire very interesting views along the avenue of Mimosa or the avenue of Magnolias.

The Villa hosted important exhibition of art with prestigious names like Tiepolo, Sebastiano Ricci and other, up to Kandinsky, Courbet and Monet and now Munch.