In the surroundings of Lignano... Venice
Назад 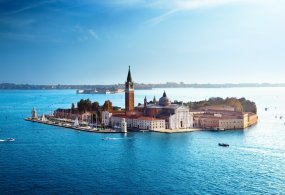 Venice is the main city of Veneto and of North-east Italy, chief town of the homonymous province of the region Veneto. It is listed as a UNESCO World Heritage Site.

The city is located, together with many small islands, in the lagoon of Venice, in the north-west part of the Adriatic Sea. Its town counts about 270.000 inhabitants, of which about 60.000 in the city, about 176.000 in the cities of dry land Mestre and Marghera and in the villages surrounding and about 31.000 in the various islands of its lagoon. The town is very large and divided, on speaks about ten different dialects.

Historically known as "La Serenissima" or the "La Dominante", has been for more than a millennium the capital of the Republic of Venice.

In the heart of the Serenissima you can breathe all the history and the power, that crossed this city, elements well represented by the Basilica of San Marco: gold-coloured and covered with mosaics that tell the history of Venice, together with the beautiful bas-reliefs depicting the months of the year.

Above the main door, the four bronze horses of Constantinople (these are copies: the originals are in the Museum of San Marco) remind the fourth Crusade in 1204. the five big domes dominate the Greek cross plan and make it recognizable and visible from afar. But the interior of the Basilica is the real jewel: lavishly covered of gold with an unparalleled mosaic decoration that extends on the entire plan. The result of a work that has certainly lasted for decades, it is probably that the iconography had been dictated by a unique program. Looking the splendor of gold and be transported to another time is a matter of seconds!

Once out of the golden Basilica, it is the Doge's Palace to attract attention. A masterpiece of the Venetian Gothic architecture, the palace was the seat of the Doge of Venice and of the magistrates and today it is seat of the Civic Museum of Doge's Palace. Begun in ninth century, the construction of the palace continues through the centuries both for renovation and extension and for real reconstructions caused by fire. Especially, after a fire towards the end of 1500, Andrea Palladio, Tiziano and Veronese take part in the reconstruction and decoration of some state rooms on the main floor.

In the early seventeenth century were added the so-called New Prisons (Prigioni Nuove), beyond the river, connected to the Palace by the Bridge of Sighs, passed by the condemned persons translated by the Palace, seat of the courts, to the prisons.

Charming is the Hall of the Great Council, one of the greatest in Europe, where there was the Great Council, composed by all Venetian nobles, with the Doge and the Signoria. This room is astonishing for its spaciousness, due to the absence of columns, and for the decorations, assigned to Tintoretto, Veronese and Palma il Giovane. Special is the decoration of the entire wall of Tintoretto, behind the throne: Paradise is the largest canvas in the world.

Can not miss a walk on the Baroque Bridge of Sighs that takes to the Leads, the ancient prisons, where also Giacomo Casanova was imprisoned.

In the beautiful Piazza San Marco stands the Bell Tower, in front of the Basilica. One of the highest in Italy, it has a simple shape and from its top, reachable through a lift, it is possible to have an exceptional panorama of Venice. From Carnival 2001 takes place the flight of the angel from the bell tower to the Palace of the Doge. An angel in the flesh, hung on a cable, takes flight on the Sunday before Shrove Tuesday, event that marks the beginning of Carnival.

Another well known place of Venice is Rialto Bridge, that crosses the Canal Grande, the largest waterway of the city. Rialto Bridge was up to mid 1800's the only way to cross by foot the major canal. Besides to be a real monument, the bridge is also the ideal place for shopping: both ramps, in fact, offer shops on both sides and the full coverage of the bridge allows the shelter from the rain and the sun. The audacity of the project led some to think that the bridge would collapse, but still stands and is one of the most important elements of Venice.

These are just the biggest and best known palaces and monuments of Venice, but the city holds many others of equal beauty. The Arsenal of Venice, the heart of the shipping industry of Serenissima, the Ghetto of Venice, beautiful core with several synagogues dating back to 500, the Lido, the beach, the Theatre La Fenice, jewel of Italian opera, Murano, Burano and Torcello, the three major islands, and many other palaces, monuments, squares and churches.