The Enviroment, treasure of Lignano
Back 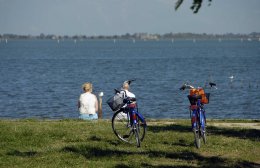 Lignano lies on a peninsula shaped by the mouth of the Tagliamento river and by the ancient net of the Adriatic streams, between the open sea and the Lagoon of Marano, along the northern shore of the Venice Gulf.

8 kilometers of thinnest sand right in between the sea and the thick pine-wood, which covers almost the whole peninsula. The luxuriant vegetation of Lignano is characterized by autochthonous plant species native to the region or here growing since ages: rows of holm-oaks all along the beach-walk, house black pines and seeds black pines, lime-trees, Siberian elms, birch trees, platans, horse-chestnut trees. Very interesting is the keeping of remarkably big oaks inside the town as witnesses of that part of the environment which has now disappeared. Landscapes all around the lagoon of Marano are made of land and water, a life element the presence of which as sea, river, or lagoon had a deep impact on the shaping of environment, lifestyle and business in Lignano.

The Marano Lagoon, which laps the west shores of the peninsula, is an area endowed with a extraordinary beautiful landscape and it constitutes an ecosystem of great environmental value because of its rich wildlife made up by very rare species, of its resistant marshy vegetation and of the peculiar fishermen abodes called "casoni", which were built with reed and which remind us of the old material culture of the lagoon, an evidence of a lifestyle and traditions the origins of which are lost in the past times. Within its jagged coast characterised by little islands and docks, this lagoon preserves vestiges of an ancient history, traces that are clearly noticeable in the valuable venetian-style town centre of Marano, a traditional fishermen's settlement dating back to the beginning of the 19th century and still enclosed within its old fortress walls.

Many rivers flow into the lagoon of Marano, which is also crossed by a thick net of channels. All these rivers, which are rich of water and navigable from the lagoon up inside the plain, do actually spring on the surface in the area between the hilly part of the region the fertile lowlands, which are called "Bassa Friulana" and are characterised by geometrically designed farm estates, simple shapes and wide open spaces.

The River Stella offers a particularly evocative landscape and enchanting surroundings, where a regional natural park is about to be created. Its mouth lies under a particular environmental tutelage because it is a shelter and breeding-ground for local migrating as well as settled water wildlife species, besides there are also birdwatching equipped locations.
This really unique environment is actually a further invitation to discover Lignano from a completely new point of view, to plunge deep inside the colours of Lignano's broad spaces, to be under the spell of its wonderful summer look or enchanted by the sad beauty of its winter, deeply enjoying all these sensations just like the young Carlino (the hero of "Confessions of an Italian", a book by the italian writer Ippolito Nievo) did when he discovered the misterious blue space called "sky", which was striped but transparent and which spread itself beyond "green blossoming plains crossed by very wide channels (...) that were flowing down to a much broader water plain on the background of which there were little mountains occasionally crowned by bell-towers"...