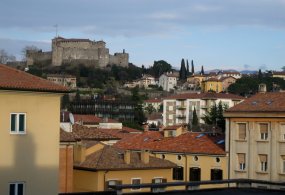 In Gorizia you can breathe the typical atmosphere of a border town: in Piazza Transalpina, up to 2004 physically divided by a wall, you can stroll with a foot in Italy and the other in Slovenia. Gorizia is the meeting point of two world, the Latin and the Slavonic, with their different cultures and traditions, but united by the same beautiful land made of gently rolling hills of vineyards. Gorizia is part, in fact, of Collio, one of the DOC wine regions in Friuli.

The first signs of settlements date back to the first century BC, but the name Gorizia was nominated the first time in 1001. The city reaches the maximum enlargement between the thirteenth and the fourteenth century, when the county came to Padua and Treviso, in the western region of Slovenian and in the near territories of Austria.

In the half of 1400 Gorizia goes under the Republic of Venice up to 1500, when goes to Maximilian I of Hapsburg. From that moment the city of Gorizia remains under the Hapsburg until 1918, becoming part of Austrian Littoral.

During the First World War, Gorizia is conquered by the Italian troupes in 1918 and all the county becomes province. During the Fascist period, the city was restored and equipped with new roads and an industrial area. Since the mid-twenties the Fascism begin to apply even in Gorizia, as in the rest of the Venezia Giulia, the denationalization policy of the Slavonic minorities on the territory.

During the Second World War, after the Italian surrender September, 8th 1943, the territory of Gorizia was scene of an heroic resistance to the Nazi. At the end of the conflict, with the peace treaty, the municipality had to give the three-fifths of its territory to Yugoslavia with the 15% of population. The old down town and the greater part of urban area of the city remained, however, in Italian territory.

Gorizia was compared with Berlin, because it was cut in two as the German capital by a wall with guard towers armed with machine guns. Now in the square, where the wall once ran, there is a mosaic and a commemorative plate. With the entry of Slovenia in Schengen treaty in 2001, Gorizia and Nova Goriza (the Slovene part of the city) are finally no boundaries and have the chance to make a series of project of mutual interest.

Inside there are the foundation of the tower. From here you can go to the Palace of the Provincial and the Palace of Veneto. Under the loggia that connects these two buildings, are visible the quarters of the garrison as they appeared in the Middle Ages: the kitchen with tables and cupboards, cutlery and chairs, a table for bread dough and other objects.

In Gorizia there is also the Cathedral of Sant'Ilario of Aquileia and San Taziano. The Cathedral has undergone various vicissitudes during his life, amputations and restorations, but you can still see testimonies and memories of eras and styles that have marked its history.

Among the other places to visit, we suggest the Church of Sant'Ignazio, desired by the Hapsburg and the Vatican to stop Protestantism, the Synagogue of 1700 and the Church of San Rocco built in the late fifteenth century.

For a relaxing break, Gorizia offers different parks in the city. There are also green areas in their natural state, such as the Park of Castle and the Vally of Corno, which extends between the district of Straccis and the city centre, along the river Corno.

Among the not protected areas, particularly charming is the first part of the river Isonzo in the municipal area, located in a gorge where water springs from the walls, with an extremely varied vegetation.